Instead of wasting the potential energy associated with the BackEMF voltage of a vehicle's electric motor via heat loss, it can be used to recharge the battery and therefore recover energy for higher system efficiency. Certain manufacturing processes can be made more efficient in similar ways. See diagrams, graphics, and equations.

In the motion control industry, the term “regeneration” or “regenerative braking” refers to using the power associated with the BackEMF (back electromotive force) voltage of an electric motor to charge a battery. This is the opposite of the normal operational mode where the battery is used to provide power to an electric motor. However, since an electric motor can act as a generator, a system can be designed where the power flow (in or out) of the motor and battery can change in real time. So, instead of throwing away the BackEMF power into heat loss, it can be used to recharge the battery, thereby recovering energy, adding to overall system efficiency. See Figure 1 below. 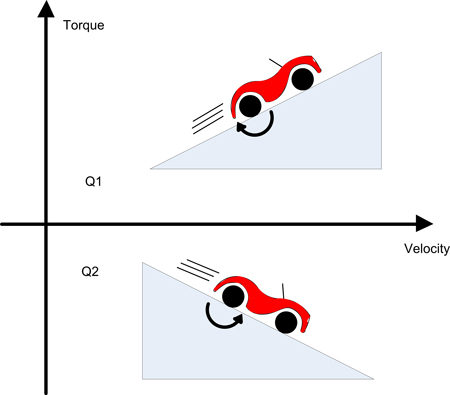 Many motor/battery systems have the potential for regeneration, this deep-dive will investigate the specific case of a battery powered vehicle using a permanent magnet motor as the drive. This system is simple and has an intrinsic steady state regeneration condition (until the bottom of the hill is reached). The drive system will operate in all “four quadrants”, meaning the drive must be able to control both the acceleration and deceleration of the vehicle in both forward and reverse. At steady state there exists the possibility to use the motor's BackEMF voltage to re-charge the battery in two of the four quadrants. Under the right conditions this can make a significant contribution to the system's power efficiency in the context of extending the time between battery charges.

Figure 1 shows the vehicle operating in two of the four quadrants, one being positive velocity/ positive torque, the other being positive velocity/ negative torque. The other two quadrants can be easily realized by reversing the sign of velocity. The direction of rotation of the motor will determine the sign of the motor’s BackEMF voltage and the magnitude of the velocity will determine the magnitude of the motor’s BackEMF voltage.

In Figure 1, the motor’s BackEMF voltage is always positive and increases in magnitude with speed. It is assumed that the vehicle moving uphill will always need a “positive” torque as indicated by the direction of the arrow. The vehicle moving downhill requires a “negative” torque from the motor in order to brake the car and prevent a run away condition.

Control of the vehicle under the given conditions requires proportional control of the current in the motor. This is achieved by utilizing a voltage regulation scheme that can apply a portion of the battery voltage to the motor with either positive or negative polarity. This proportional voltage is referred to as an “effective voltage” (Veff). This concept is the foundation for common servo motor drives (linear and PWM switching) where proportional control is required. The effective voltage, along with the motor components, is used in the standard electrical motor equation which can be derived from Figure 2 after substituting effective voltage for the battery voltage.

Where Does Regeneration Live?

All points in quadrant #2 (see Figure 1) correspond to a condition referred to as “dynamic braking”. The motor current is producing torque in the direction that opposes motion (hence the “brakes” are being applied). The emotive force behind that current could be the battery or the BackEMF and, in almost all of cases, is a result of both.

For the steady state condition, quadrant #2 can be further divided based on the sign of the effective voltage, Veff, which is determined by the controller to yield a specific motor current. The region in quadrant #2, where the effective voltage is positive (opposing the BackEMF), is where “regenerative” braking takes place (not just “dynamic“ braking). Refer to Figure 3 for an illustration of this. In the case of transient operation, regeneration can occur anywhere within the operating range.

This is also the one and only steady state region where current is flowing into the positive terminal of the battery. Assuming the duration of time spent in this region is significant, this condition equates to electrical power flow into the battery and hence the battery is “re-charging”. In the given system, the path of energy exchange begins with gravitational energy (elevation change) conversion into kinetic energy which includes the rotational energy of the vehicle’s wheels. The wheel rotation translates into a motor rotation and subsequent BackEMF voltage which, under specific conditions, results in current flow into the positive battery terminal.

Figure 3 was derived for the given system but is valid for simple inertial systems driven by a motor operating at steady state. In other systems, external forces could alter the location of the operational envelope defined there.

An H-Bridge is the most common scheme used to implement a four-quadrant PWM controller on a Brushed DC servo motor. The PWM duty cycle controls the proportion of the supply voltage (battery) that the motor is exposed to, which has been previously referred to as the effective voltage.

A steady state analysis will be performed at a point in the positive velocity regeneration region. The motor winding current at steady state can be expressed in terms of effective voltage, BackEMF voltage and winding resistance.

The steady state selection point results in the following requirements:

A motor controller will control the effective voltage to the motor by controlling the four MOSFETs of the H Bridge shown in Figure 4.

Various switching schemes exist for controlling the four MOSFETs, one of which will be employed here. We now join the PWM cycle with the system at a steady state with an average negative current (opposite the direction shown in Figure 4), positive BackEMF voltage, and positive effective voltage. Looking inside the PWM period there are four MOSFET drive states occurring over one PWM cycle in this order: