One simple form of motion control synchronization, and one still very widely used, is an external signal trigger that causes a synchronized change in the profile for one or more axes. This setup is shown in Figure 1.

Modern motion controllers allow a range of automatic trigger conditions (sometimes also called breakpoints) so that axes can be started, stopped or otherwise altered upon an external signal change, and so that the triggering condition can be nearly any combination of signal conditions.

In a typical application, the host controller pre-loads a new set of profile parameters and sets a breakpoint event to occur upon the desired external signal condition. When the signal reaches the desired state, the motion controller automatically initiates the new motion profile.

I Drift Therefore I Am

There are a number of applications where this approach won't work. One is if there is a need for synchronization between axes during motion, not just at the start of motion.

Why would two or more axes get out of synch during a motion? The reason is that motion controllers run their clocks from an internal oscillator. Since each oscillator provides a slightly different frequency, drift can slowly accumulate between multiple axes.

For most applications, because the moves are short, or because it is OK for axes to arrive at slightly different times, this is not a problem. But where it is, one solution is to explicitly synchronize the servo loop rates of each controller.

This can be done by arranging for one of the motion controllers to serve as the 'master' by generating a 'synch' or 'strobe' signal, which is then input by one or more slave controllers. Figure 2 shows such a setup.

Get Your Gear On

What if synchronization is more than a matter of keeping axes coordinated with themselves? Consider the application of a robotic arm that must track the speed of an external conveyor. In this application, the conveyor speed may not be exactly known and therefore the robot arm must somehow be synchronized by a signal that changes constantly. 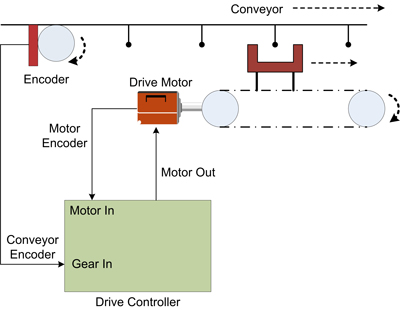 To make electronic gearing work, the host specifies the ratio of driven-motor output counts for each input encoder count. Multiple axes can be driven at different ratios, allowing, for example, a continuous web to be guided by rollers of different diameters.

Additional features of electronic gears include continuously changeable gear ratios, resulting in smoother starts and stops, and the ability to track an internal axis position, rather than an external encoder data stream. This allows, for example, multi-axis straight-line moves to be drawn, even while the profile moves through a complex velocity profile such as an s-curve. 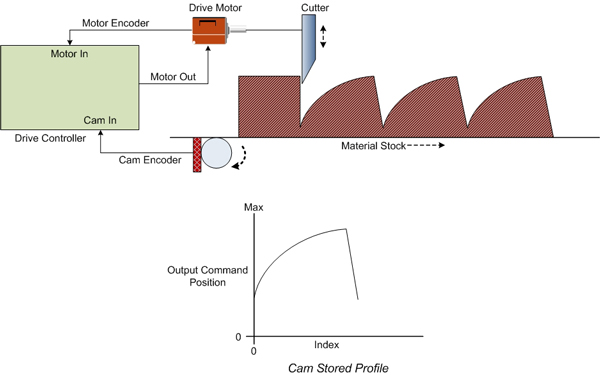 If multiple axes are controlled by cams, it is easy to create multi-dimensional shapes. For example, to draw circles or ovals from a linear input motion, sinusoids would be loaded into the lookup table, comprising the X and Y components of the circular shape. More commonly, cams are used to implement kinematically complex relationships between axes, such as occur with a SCARA-style robot (Selective Compliance Assembly Robot Arm).

Just as with electronic gearing, cams can track an internal axis as well as an external encoder data stream. When tracking an internal signal, one axis acts as the master and the other axes act as followers using the specified cam profiles.

CAM lookup table schemes come in various flavors to control how the output position is generated. There are lots of vendor-specific variations, but the basic idea is that cams can generate cyclical paths that always return to the same location, or paths that generate a net positive or negative position path.

I've Got The World On A Lookup Table

Motion controllers with CAM profiles offer a few ways to manage this by allowing an offset to be inserted into the index lookup. While moving, introducing or changing this offset should be done smoothly so that the change in offset does not cause an abrupt change in cam output.

Finally, for obvious reasons, changing the cam shape (the loaded CAM profile) while it is being used is not recommended. For systems that must constantly be on the go, however, a common switchover scheme is to use a 'foreground' CAM profile for active motion and a 'background' profile for loading new profiles. By carefully synchronizing changeover of the foreground with the background, it is possible to switch on-the-fly with no abrupt changes in motion.

The Network Is The Motion Computer

Some digital networks, particularly those that utilize the synchronizing protocol IEEE 1588 PTP (Precision Time Protocol), can synchronize axes to very high accuracies, just as if a physical 'strobe' signal were connecting each module.

Building a motion controller using one of these synchronized protocols may or may not be your cup of tea, because while fast, the control languages provided by these systems need a lot of attention from the host.

The most common approach requires the host to send a continuous stream of PVT (position, velocity, time) points for each controlled axis, generally about once every 10mSec or faster.

For CNC applications, plotters and a few other applications, there are packaged PC-based software programs that do the heavy lifting. But for general purpose motion applications such as medical, scientific and most machine automation, this software would likely have to be written by the user.

To wrap up our discussion of synchronized motion, we have prepared a demonstration, which is diagrammed in Figure 5.

Figure 5: Position encoder data stream is provided by a falling weight connected by a thin wire

The position of each motor is commanded via the ION's electronic gear profile mode. Everything is arranged so that the falling weight and the two ION-driven motors arrive at the same point in time and space.

Even though the weight continually accelerates at 9.8 m/sec2, the IONs can easily track the changing speed of the falling 500g weight, as the high speed camera shows!

Performance Motion Devices helps get your motor control applications to market faster because we provide all the tools you need for success: