What is an encoder?

Simply, an encoder is a device, circuit, software program, algorithm or person that converts information from one format or code to another. As it relates to motion control, encoders are used in machine designs that require motion feedback and motion control such as position (incremental or absolute), count, and direction.

The A, B, Indexes of Encoders

The basics of sensing position begin with the motor and mechanism that we will measure. Broadly speaking, encoders come in rotary or linear configurations, reflecting, not surprisingly, the two major types of motor actuators: rotary and linear.

Figure 1 shows a basic rotary optical encoder that outputs position information in quadrature format using two wires, 'A' and 'B'. The encoder also provides a once-per-rotation index pulse. The most common method used for constructing this encoder is using an array of opaque and transparent segments arranged so that when rotated, the A & B output signals are 90 degrees offset, as shown in the diagram below. The A, B and Index signals are created from LED (light emitting diode)/sensor pairs in the unit's electronics.

An index pulse provides a brief output signal once every rotation of the motor completes. This signal can be used during homing, or for automatic count loss correction.

Did You Get Lost?

In most quadrature encoders, the 'A', 'B' and 'I' signals are differentially driven to reduce the chance of losing counts through extraneous electrical noise. But this is far from foolproof, particularly in harsh environments.

Many motion controller products, including PMD Corp's Magellan® IC, automatically correct for encoder count losses using the index. Since this pulse should always occur at exactly the same point of the motor's rotation, it is reasonable to assume that if it is received a bit 'early' or a bit 'late', incremental counts have been lost and to auto-correct for those losses.

In addition to count loss during movement, the other limitation of an incremental encoder is that the system does not know where the motor is upon wake-up. For many systems, this is easily corrected with a homing sequence, but for other applications, it is necessary to know where you are at all times.

Absolutely, I Use Optical Encoders

This brings us to the second major category of position encoder types - absolute position encoders - of which optical absolute position sensors are the most common. As the name implies, these encoders know where they are at all times. For rotary motors, they come in single-turn or multi-turn versions and output in binary word format, or an alternate format especially adapted for encoders called Gray Code.

Some absolute encoders with parallel-bit interfaces have thick wire bundles to carry 14, 16, 18 or more bits of position information. Increasingly though, absolute encoders use serial data formats such as SSI (Synchronous Serial Interface) to reduce the number of wires to communicate position to the motion controller. We will discuss various types of data formats for encoders a bit further on in the article.

Absolute encoders come in a wide range of resolutions. High-end units can provide a remarkable 25 bits of resolution, and even more. To ground that number in reality, 25 bits means 225 or 33,554,432 separate resolvable locations. In a single-turn rotary encoder, this means an angular resolution of 0.0386 arc seconds!

The sensing mechanism for high-resolution optical encoders tends to be more complicated than etched arrays of opaque/transparent LED/sensor pairs, such as those used in the standard quadrature optical encoder.

The subject of many recent patents, is a seemingly ever-expanding galaxy of techniques that use phenomenon such as interactions between multiple disks to create higher accuracy output signals. Most of these techniques, in one way or another, rely on the generation of nearly math-perfect multi-phase waveforms which are then electronically extrapolated to increase accuracy.

But There Is A Fog Bank In My Motor

Are there position encoders that can operate without optics? The answer is yes. There are several reasons why this might be advantageous. The most common is the ruggedness. In dirty, greasy, high shock environments optical encoders may be too delicate.

Historically, the most common non-optical position encoder is the: ResolverIt uses an arrangement of motor-winding-like coils that induct current to generate sinusoidal A and B output signals. Resolvers require no electronics in the sensor and can, therefore, operate at very high temperatures and in very harsh environments. Resolvers do need electronics to work with digital controllers, but these are located outside of the motor/sensor. Known as R/D (resolver to digital) circuitry converters, this circuitry converts the analog resolver signals into incremental or absolute digital position information. 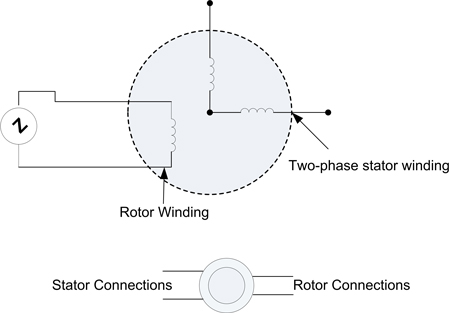 Another position encoder type, one that is rapidly gaining in popularity, is the: Magnetic EncoderThis type of encoder uses a galvanomagnetic or magneto-resistor sensing element and typically outputs in quadrature format. Resolutions tend not to be that high, similar to low-end optical quadrature encoders (although increasing rapidly as the technology matures). The big advantage of magnetic encoders is that the sensor and the encoding disk/surface are contactless and can therefore be completely sealed, leading to excellent tolerance of physically dirty environments.

An encoder that has found a niche in some application is the: Sin/Cos EncoderEssentially a variation on the standard A, B quadrature sensing scheme, Sin/Cos encoders output sinusoidally varying A and B signals rather than digital A and B outputs. These sinusoidal outputs, which are 90 deg out of phase with each other, can be used to electronically extrapolate position resolution, extending the encoder's performance. 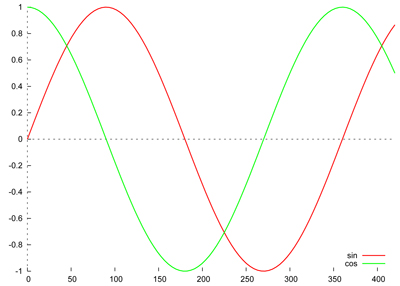 One final sensing approach that has found wide adoption in positioning motion systems is the: LVDT (Linear Variable Differential Transformer)This device, as the name implies, is used to measure linear displacements. It accomplishes this by measuring the current induced by a primary coil in secondary coils, which changes based on the location of a ferromagnetic core tube attached to the moving axis. Like magnetic encoders, it is contactless and can therefore be completely sealed, which helps increase ruggedness. Unlike magnetic encoders, the output is an analog voltage and therefore needs to be converted by external electronics for use with a digital motion system.

We began the discussion of encoders with the venerable optical incremental quadrature encoder. The quadrature encoding format still rules the roost for cost-sensitive systems. There are literally thousands of different encoder products that support it and virtually every motion controller accepts it.

In the next few paragraphs we will run through several other formats. Particularly as the machine control world becomes more network-centric, serial and network-based encoder data formats will gain popularity. And for high-end absolute encoders, which have evolved from providing 16 bits, to 20, to 24 bits and beyond, serial networks are rapidly becoming a defacto standard.

By far and away, the most common standard for dedicated serial encoder data networks is the: SSI (Synchronous Serial Interface)At the core, this interface uses a data signal and a clock signal to transmit position data from the encoder to the host controller. The clock signal can be arranged so that position updates are synchronized with the controller's servo sampling time. After adding support signals and differential encoding, SSI encoder cables can have anywhere from 6 to 10 wires.

A newer serial network, conceptually similar to SSI but adding some twists such as higher data rates and direct support for Sin/Cos encoders, is the: Endat serial interfaceAlthough gaining in popularity, one caveat is that it is still proprietary, having been developed by Heidenhain. Whether or not it will become an open standard remains to be seen.

We Will, We Will Assimilate You

The other major category of data formats by which encoder data can be transmitted is local machine control data networks. Unlike SSI or Endat, these networks are used for general machine control, but they also have support for the encoding of position information.

Ultimately, whether or not you should consider network-connected encoders hangs mainly on - surprise - whether your machine will be controlled by that network. If so, it may be convenient to build a backbone that also incorporates the encoders.

Having said that though, many design engineers will use an overall machine control network yet still connect to the encoder by a different scheme, such as quadrature. This is because very few networks close the motors' position loop at a central controller, instead of leaving that to network-connected intelligent amplifiers.

In any case, here is a partial list of networks that can directly support encoders in one way or another:

To wrap up our discussion of encoders and encoder data format, we have set up a simple demonstration in the PMD lab utilizing a linear stage and high accuracy encoder.

Video: Linear Stage Traversing The Width Of A Human Hair

The video shows the stage traversing the width of a human hair. The encoder here is accurate enough that each move segment, traversing only about 1/5th the distance of a human hair (~20 microns), was commanded to move more than 200 encoder counts, or about 100 nanometers per count!

The amazing thing is that there are encoders on the market that have a position resolution of one nanometer. A nanometer is indeed very small, firmly entering the realm of the size of individual atoms. Moving up in scale, a typical germ is about 1,000 nanometers and a human hair is about 100,000 nanometers in size.