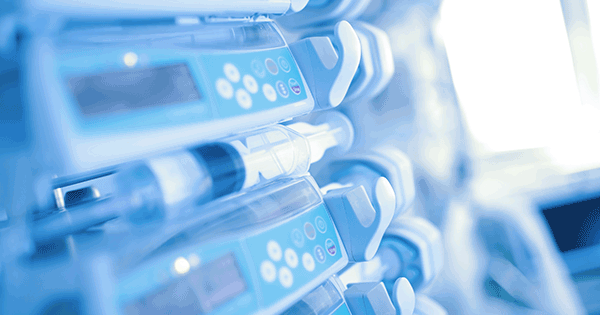 Liquid Handling Robot systems oftentimes use peristaltic pumps to deliver reagents and other fluids to test sites. Although some smaller volumes of liquid can easily be delivered by plunger-style syringe pumps, larger liquid volumes often use peristaltic pumps because they have much higher displacement volumes and the mechanical system of rollers and motors are not exposed to the liquid itself. However, peristaltic pumps also exhibit a pulsating flow behavior associated with the squeezing of the roller-wheels against the liquid tubing. The resulting unstable flow rate can lead to problems in precise liquid volume delivery, since the delivered liquid volume can show some dependency on the location of the rollers at the end of the commanded rotation of the pump.

Fortunately, the flow rate fluctuations are very predictable because the mechanical system of the rollers is known, and some simple calibrations can be used to create a velocity adjustment loop for the pump that results in a much evener flow rate. Another option is to use a fast flow rate sensor that outputs a signal that is proportional to the flow rate. A compensation loop that compares the actual flow to the desired setpoint allows a control system to compensate in real-time for flow rate variations.

This paper will demonstrate the statistical differences in delivered volume with and without an adaptive control system and the resulting higher accuracy that can be achieved.

Peristaltic pumps are commonly used to deliver larger amounts of liquid to a site where the liquid is needed. A typical peristaltic pump (Figure 1) consists of a pump housing, a spinning rotor driven by a motor/encoder, typically 3 or 4 rollers, and a flexible section of tubing. The rollers compress the tubing while rotating thereby moving pockets of liquid from intake to outlet. The advantage of peristaltic pumps is that only the tubing is in contact with the liquid. The disadvantage is that the discrete pockets create an unsteady flow rate (Figures 5a and 5b), resulting in difficulty delivering small, precise volumes of liquid. In higher-end peristaltic pumps, a Brushless DC (BLDC) motor with a quadrature encoder and Hall sensors is typically used. A BLDC motor/encoder lends itself well for a more sophisticated controls approach as shall be discussed in this paper. 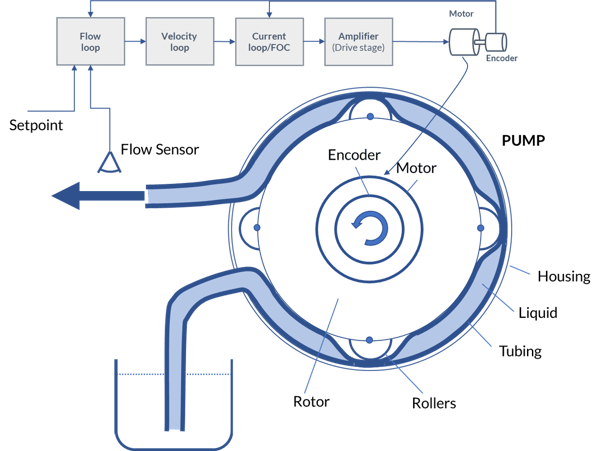 Figure 2 through 4 illustrate several methods of controlling the pump motor in a peristaltic pump. The simplest controller (Figure 2) applies a voltage to the motor without any form of feedback. The motor speed will depend on the applied voltage. Clearly this control gives no consideration the actual delivery velocity of liquid or the velocity of the motor as a result of the tubing compression and will thus result in the largest flow variations (Figures 5a and 5b). In addition, stopping the pump is imprecise, resulting in an unpredictable amount of liquid being delivered. For large volumes of liquid this may not matter since there are many pump rotations involved, but for smaller volumes this effect becomes important. Figure 3 demonstrates a control mode wherein encoder signals are fed back to a velocity control loop which is regulated by a velocity setpoint and Hall signals are fed back to a current control loop. The velocity loop outputs a torque command to a current loop (PI controller) and a Field Oriented Control (FOC) scheme which generates a PWM signal as an input to the amplifier. When one of the rollers starts compressing the tubing (or starts releasing it) the velocity changes and the torque delivered by the motor is changed as well, resulting in a more even rotor rotation. Depending on how “stiff” the controller is this will result in a fairly even velocity of the rotor and thus in even liquid delivery. Figure 4 is an enhanced version of the controller in Figure 3, wherein a flow compensation loop is added to the control scheme. This results in a system wherein the increases and decreases in flow from the rollers compressing the tubing is part of the feedback in the control system, thereby making the system stiffer than the controller in Figure 3 that is not aware of the actual flow rate changes.

However, in such a system, the reaction speed of the flow sensor has to be faster than the actual changes in flow. This can be accomplished with turbine-based sensors as well as non-contact sensors such as ultrasonic sensors. This controller, by measuring the actual flow rate, gives a more robust compensation mechanism particularly at low velocities.

In our experiments we used an FPU 500 pump from Omega coupled with a BLDC motor with Hall sensors and a 2,000 count (500 line) quadrature encoder. The controls were provided by a Performance Motion Devices Juno® MC78113 Developer Kit board with on board amplifier. The Juno IC was running a current loop (PI) at 20 kHz and a velocity loop at 200 Hz (when used). A McMillan model S-111 flow meter with a range from 13-100 mLpm and 1.0% accuracy and 0.2% repeatability and less than 1 second response time (full scale) was used for the controller in Figure 4. Operating the pump with 4mm tubing we were able to easily achieve a flow rate of 20 mLpm (20% of full scale) at a rotation speed of 0.5 rps or 30 rpm. Since the Omega pump employs 3 rollers spaced at 120 deg, we see that a roller transfers along the sidewall of the pump housing in approximately 1.5 seconds. 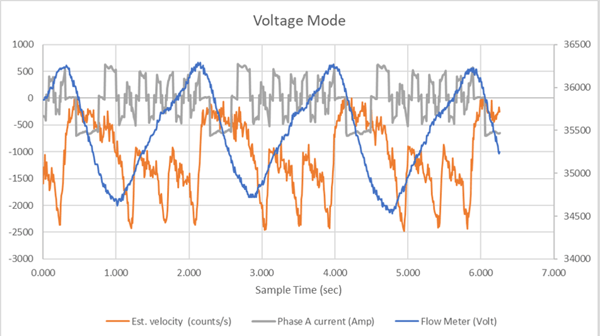 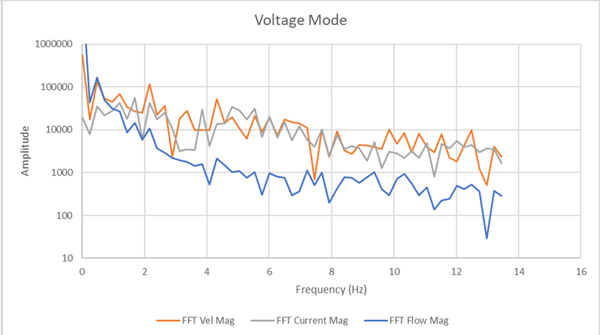 For each of the 3 control schemes in Figures 2, 3 and 4, we measured actual flow as indicated by the S-111 sensor as well as the RMS and average motor torque and analyzed the dominant frequencies in the spectrum.

Figures 5a and 5b show the measured output of the open loop Voltage mode measurements. Figure 5a shows large variations in actual flow and Figure 5b shows that the dominant frequencies are around 0.5 and 2.1 Hz, corresponding to the motor rotation frequency and the roller rotation speed respectively. Figure 6a and 6b show the same measurements for the Velocity Loop mode in Figure 3. As can be seen from the figures, the variations in actual flow rate are significantly reduced, and mainly the motor frequency (0.5 Hz) is no longer showing in the flow signal, although the variations caused by the rollers (2 Hz) are still clearly visible.

Figures 6a and 6b: Velocity Loop Mode

Figure 7a and 7b we show the results of the controller in Figure 4, which adds the outer control loop for flow to the velocity loop. As can be seen in the figures, the variations in flow are further reduced as are the peaks in the frequency spectrum.

Figures 7a and 7b: Velocity Loop Mode

Figure 8 summarizes the above results and also looks at the standard deviations of the measurements. As can be seen in the figure, the standard deviation in the actual flow was reduced from 513 mL/min to 90 mL/min—an improvement of more than 5X. The control modes described in this paper lend themselves well for low flow operation of peristaltic pumps if the controller adds at least a velocity/FOC loop but can be improved even further with the addition of an outer control loop that integrates an actual flow sensor.

PMD has been producing motion control ICs that provide advanced position and torque control of DC Brush and Brushless DC motors for more than twenty-five years. Since that time, we have also embedded these ICs into plug and play modules and boards. While different in packaging, all of these products are controlled by C-Motion, PMD's easy to use motion control language and are ideal for use in liquid handling, patient treatment, laboratory equipment, semiconductor, and robotic motion control applications.

ION Digital Drives combine a single axis Magellan IC and an ultra-efficient digital amplifier into a compact rugged package. In addition to advanced servo motor control, IONs provide S-curve point to point moves, i2T power management, downloadable user code, and a range of safety functions including over current, over voltage, and over temperature detect. IONs are easy to use plug and play devices that will get your next laboratory equipment or patient treatment design up and running in a snap.