This use case explains how to an external motion controller may be used as indexer in assembly systems with static or dynamic indexing configurations.

Many assembly systems utilize a conveyor belt that will “index” a subassembly to a designated work area. There are various ways to implement indexing and the overall complexity of the assembly process will dictate the most efficient implementation. The challenge often is to understand the implications of different indexing approaches and select the most appropriate one. This note will demonstrate three discrete configurations for indexing, each addressing different levels of manufacturing sophistication, within the context of an ultrasonic welder: Static Simple Indexing, Static Complex Indexing and Dynamic Indexing. In each case, the motion controller will perform indexing functs/digital_drives benefits of reduced hardware, simpler code structure and greater machine reliability are easily achieved by off-loading the motion process control to an external controller. 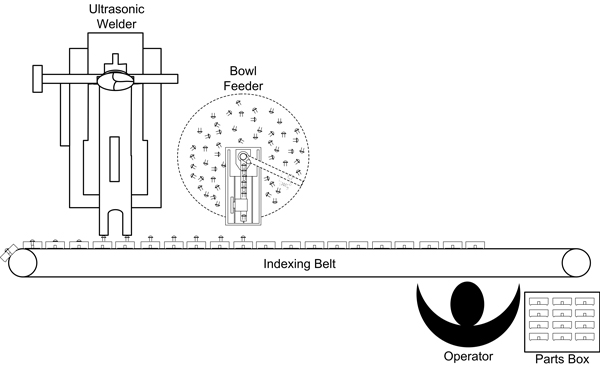 In the case of Static Simple Indexing, the operator of the ultrasonic welder supervises the index process. This human supervision is adequate because this application is simple and the process has very few variables. Because of the simplicity of this process, there is no need to employ the use of a PLC; user code loaded directly on the ION/CME Digital Drive controls the I/O signals. This reduces hardware count and results in the use of a single programming language with a simple code structure, which lowers overall cost.

When designing a machine for Static Complex Indexing, the ION/CME Digital Drive is connected to a PLC and becomes a sub-process of the larger automation process. Because of the variability in the distance and timing of the move, the input signals to the ION/CME Digital Drive are significantly more complex. This necessitates the use of a greater number of inputs, control of which is offloaded to the PLC, which places the complex part handling process under the supervision of the PLC. User code on the ION/CME indexes the conveyor belt, as and when requested to do so by the PLC. To ensure that the PLC properly controls the ION/CME Digial Drive, a simple 3-wire handshake is used. Other input lines are used to select one of several different index distances, thereby giving the system greater manufacturing flexibility.

If the index position requirements are greater than the I/O line configuration allows, then the Dynamic Indexing method should be used. In this case, the ION/CME Digital Drive is used for basic user interfacing, such as the start button, while the configuration and automation control comes from a PC. Since indexing positions are expected to change on the fly, and because intensive error checking needs to be performed, PLC code no longer suffices. Instead, the code is written in a language better suited to this function (such as C or C++ code that resides on a PC host or the ION/CME itself). This alone significantly reduces development time and increases the benefits of lowered cost.

Ladder Logic, used in PLC programming, is one such language whose code structure is complex and ill-suited to motion control applications. When programming basic motion functions such as position, velocity acceleration and deceleration using Ladder Logic, the PLC programmer needs to calculate and monitor these variables to ensure the move executes as intended. When using an external controller like the ION/CME Digital Drive, this capability is built into the controller itself. Because of the limiting structure of Ladder Logic, just the simple function of calculating a trapezoidal move on a PLC will require significantly more lines of code than a motion controller or PC. This simplified language leads to redundant processors and hardware. By choosing the hardware, programming language and code structure that optimizes each sub-system, the entire system is optimized and has a lower design cost while maintaining a high degree of machine reliability and robustness.